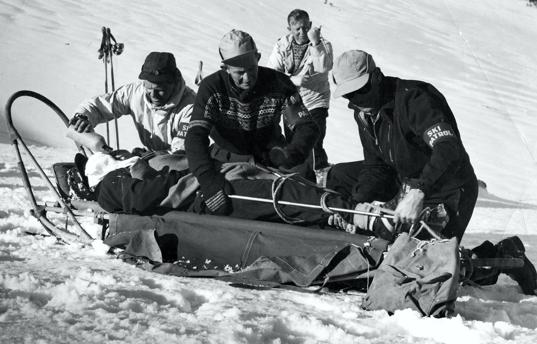 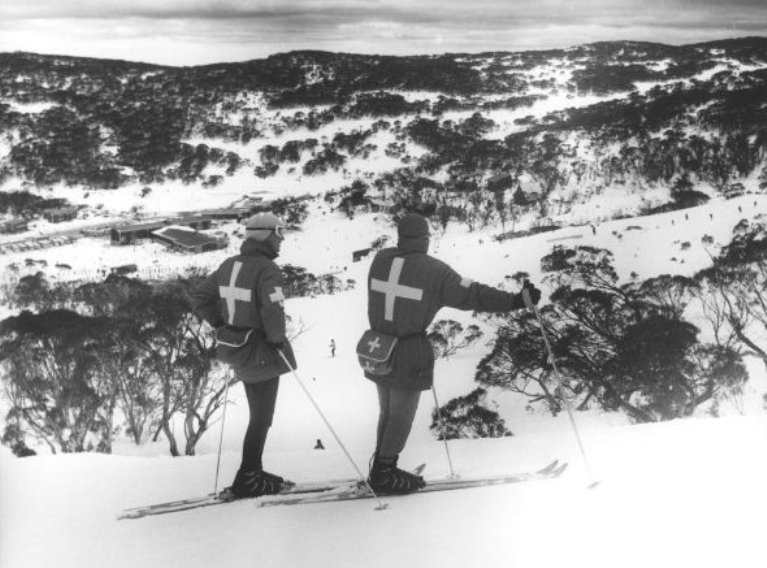 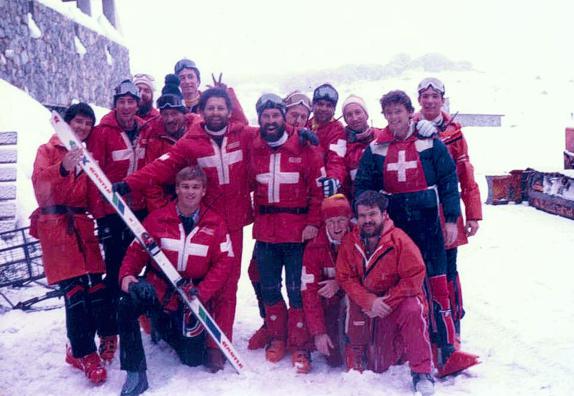 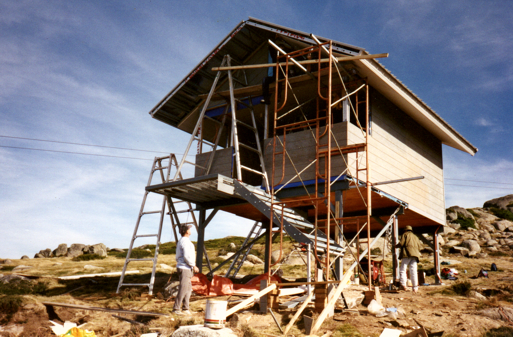 A history of excellence & community service...

Perisher Ski Patrol has always been driven by its values.  For 50 years PSP has engaged with the alpine community to create a service organisation of outstanding merit.  It is a respected part of the Snowy Mountains.

Our History and Archive Sub-Committee strives to collect the photos, stories, and reminiscences of our illustrious contribution. Please feel free to donate a copy of your photos / items to maintain the heritage of the patrol.

Perisher Ski Patrol formally started its operations in 1968 based on operations of the Smiggin Holes Ski Patrol which commenced operation in 1960. It was established to provide first aid treatment to injured skiers. With the acquisition of Bluecow and Guthega ski resorts, the combined Perisher Resort became the largest ski resort in the southern hemisphere, with over 50 lifts covering an area of 1250 hectares. Perisher Ski Patrol covers four zones: Perisher, Smiggins, Bluecow, and Guthega. In order to cover this large area, 24 full time patrollers and over 170 volunteer patrollers work to ensure the safety of guests. During busy periods, 60 of these patrollers can be on duty at one time.

A Recollection (Adapted from an article by Pat Edmondson 1986)

Perisher Ski Patrol is the oldest Ski Patrol in Australia having its roots as the Kosciusko Safety Ski Patrol (KSSPA) in 1960. Each of the Perisher ski area has its own special story to tell as a patrol organisation: Guthega, Blue Cow, Perisher Valley and Smiggin Holes developed independently, later morphing in stages into the current Perisher Ski Patrol Inc. In 1960, the Kosciusko Safety Ski Patrol (KSSPA) was formed by Snowy Mountains Authority employees, mainly from Cooma, to look after the Smiggin Holes and North Perisher slopes. In 1964/65 Don Oyston and Col Bruton became involved with the Patrol and enthusiastically recruited ski patrollers from the Illawarra region, many of whom were Illawarra Ski Club members. A large meeting held at the Master Builders Club in Wollongong in 1965, decided that the Patrol should have branches in Cooma and Wollongong with a co‑ordinated central committee. This was done and in 1967 a Sydney branch was formed. Some of the members involved were: Don Oyston (President), Col Bruton (Club publicity officer and then secretary), Pat Edmondson, Peter Swan, Barry and Laurelle Roberts, Adolf and Ria Ploss, Gobi Hubscher, Trevor Ashton, Sue Edmondson. Dr Ian Dunlop assisted with first aid lectures and Dr Ken Doust did the examining.

Don Oyston, a Wollongong ambulance officer, was a tower of strength to the Patrol in passing on his knowledge and expertise to fellow Patrol members. Col Bruton conducted a very active publicity campaign during the early years, with the help of Pat Edmondson, who was commended in 1969 by the Smiggins Ski Association for his work in developing the Ski Patrol. In the early years of the Perisher Valley Enterprises ski tow at Smiggin Holes there was no paid patrol. The first paid patrol was not operational until 1969 and then, when members of the KSSPA were not available, the lift operators did the work. This arrangement continued when the Smiggins Hotel took over the lifts and the cooperation with the Hotel management was generally very good, It should be noted that the KSSPA took a leading part in the formation of the NSW, Perisher and Australian Ski Patrol Associations. In fact Ski Australia, in August 1968, reported that, "the blueprint for such an association had been established by a group of dedicated skiers and has operated, very successfully, for the last six years in the Smiggin Holes area.

During the 1966 season a constitution committee, comprising Pat Edmondson, Gobi Hubscher and Col Bruton completely revised the Patrol Constitution. The constitution of the Illawarra Branch of the Surf Life Saving Association was used as a model for the Ski Patrol. John Fitzgerald acted as honorary legal advisor. In 1973 Kosciusko Alpine Resorts (Perisher) bought the Smiggins operation. The manager, Harold (Black Harry) Droga and the Patrol did not work well together, resulting in eventual dismissal of the Patrol in 1977. It is ironic that Smiggin Holes is now mainly serviced by professional patrollers with occasional support from a Perisher Ski Patrol volunteer. The Patrol also took an interest in search and rescue away from the piste. With donations received, it purchased cross-country skis and back packs of emergency equipment which were always available at Smiggin Holes. The Patrol also trained Kosciusko rangers, police, Snowy Mountains Authority and State Rescue personnel in first aid in the snow, Alkja handling and survival.

If there are any mistakes in this, I will plead loss of memory but I do know that the Perisher Ski Patrol Association came into being in 1968 at my home in Blakehurst. Prior to this in 1964, Brian Davidson moved from the Chalet at Charlotte's Pass to Perisher. Stan McGuinn was the operations manager for the commercial interests of K G Murray and employed Brian as the valley's first Ski Patrol officer with a nursing sister to call on. Brian was appointed to "control the usual volunteers", one of whom I became during my many visits to Perisher. In the same year (1964) Brian appointed Grant Turnbull as Perisher's first professional patroller.

During the following two years, prior to his appointment to the Perisher Ski School in 1966, Grant was usually stationed at the base of the Mt. Perisher double chair where volunteers would turn up for patrol work, shovelling and slope marking. To those of us who were reliable, capable of handling a sled and knew what we were doing, Grant would give a ski patrol "bib" which was made of red material with a white cross stitched on the front and back ( similar to the Swiss flag) . In return for these duties, we were given free skiing for that day. In 1966 after Grant's appointment to the Perisher Ski School and with the accelerated growth in skiing numbers, Stan McGuinn employed professional patrollers and this situation has continued to this day. I skied in Europe in 1966 – 1967; it was during this trip that I became aware of the prevalence of ski patrollers and the duties they performed in the European ski fields.

The growth of skiing in Australia and the numbers of skiers on the slopes accelerated in the 60s. There existed a well run small volunteer ski patrol at Smiggin Holes, a very professional volunteer patrol at Thredbo and I felt that Perisher should have its own volunteer ski patrol. Accordingly, I contacted the secretary of every Perisher ski club and asked that they notify their members that I intended to form a volunteer Perisher Ski Patrol and that I was holding a meeting at my home in Blakehurst (I think it was in March) in 1968. The place was packed. There must have been at least fifty skiers jammed in our lounge room. The meeting elected me as President, Ron Pepper as Captain and Kav Reddan as Secretary.

I had the belief that our starting point had to be a patrol manual, which would communicate to the members the standards, practices, and operations of a voluntary ski patrol organisation and that this manual be given to every member as soon as possible after joining. I virtually gave up work for three weeks. I wrote to the Canadian Ski Patrol Alliance for a copy of their manual and asked for permission to copy it. As not all their ski lifts and sleds were the same as ours (for example we used the steel handled "akja" sled where they used sleds controlled by ropes) I consequently had to change some of the terminology but retained the safety procedures.

Every page of the Canadian manual had to be re-typed on a special surface that could be attached to a steel barrel that would be then fitted to a "Gestetner" machine. Once fitted and filled with a special ink the drum would be turned by a handle and a printed page could be produced every three seconds. Ron Pepper, our captain, worked in Wollongong Hospital and had access to a "Gestetner". I would get a number of pages typed out in Sydney and drive to Wollongong in the evenings to get them printed on the "Gestetner". After a few weeks of this we finally had a manual but without a printed and bound cover.

I went to Mr K.G.Murray's office in Clarence Street, Sydney and told him that we had the basis of a volunteer Perisher Ski Patrol. Its reply was 'I suppose you need a donation?". He promptly wrote a cheque for $500! We now had a membership and an official manual that enabled us to communicate to members the standards, obligations and requirements of membership. Then all sorts of problems arose. Perisher employed three professional patrollers to cover the entire area where I envisaged two volunteer patrollers for each lift. Our communication with Perisher management was poor in that we could not agree on rosters or numbers. I had the feeling that management did not take us too seriously and that the professionals did not really want us as they thought they might lose their jobs.

I was a representative of the AMP Society at the time that meant that I was really self-employed. As I worked from home, I had no office facilities such as staff or office equipment to help with communications or the running of the patrol. Furthermore, I was getting married in 1970, responsibilities were beginning to develop and business time was becoming more important than skiing time. I felt that I had bitten off more than I could chew" so in 1970 I resigned from the operation and Bert Gardner was elected the new president.

Bert had a successful electrical contracting business at Production Avenue, Kogarah. He was a born organiser and possessed real community spirit and turned my failures into success. As I write this today in 2011, the Perisher Ski Patrol Association is a viable, successful and desirable organisation that is the result of the dedication, enthusiasm and efforts of Bert Gardner in the 70s and many other community minded individuals since.