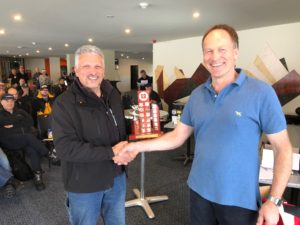 Perisher Ski Patrol is pleased to recognise outstanding and long-term superior service to the organisation and the skiing public.  Often we have unsung heroes who work invisibly behind the scenes to ensure the success of the team.Our organisation requires a huge effort to keep it going from year to year (and decade to decade). The Outstanding Service Award (and the perpetual trophy that goes with it) recognises the meritorious and exceptional effort that has resulted in significant and sustained improvement to the patrol.  These individuals (and often their families) tirelessly offer their wisdom, their skills, their time, their historical perspective and their professional capabilities. This award is in keeping with the highest honours and recognition that the patrol grants.

The National Medal recognises long and diligent service by members of recognised organisations that risk their lives or safety to protect or assist the community in times of emergency or natural disaster.

The National Medal was established in 1975 as one of the first three elements of the Australian honours system. When the medal was first introduced it recognised 15 years of diligent service by members of the Australian Defence Force, Australian police forces, and fire and ambulance services. In 1982, eligibility changed. Eligibility for the National Medal expanded to include people who had participated in volunteer service and emergency services.

The Governor-General awards the National Medal. The award recognises long service in approved organisations that protect life and property at risk to their members.

Fifteen years’ of recognised patrol service is required to qualify, with a recommendation from the NSW Volunteer Rescue Association. Clasps are awarded for each additional ten years’ service.